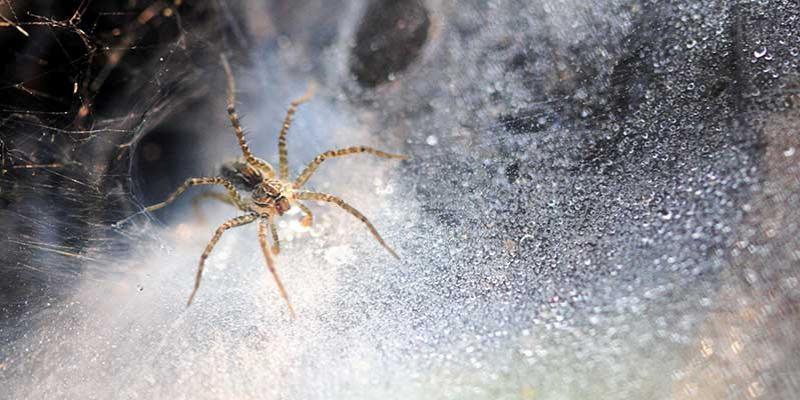 1. Some Spiders Recycle Their Webs

Creating the silk for webs requires yards of amino acids (the building blocks for protein), so some species of spiders eat their webs instead of abandoning them. This “recycling” allows them to reuse the amino acids for the next webs. Many orb-weaving spiders do this as their webs are often damaged by wind or rain, so they rebuild them during the night. Instead of eating their webs, other spiders will use the silk to wrap their eggs.

Spiders may be the only reason you aren’t swarmed with insects all summer long. A study in the scientific journal The Science of Nature estimated that spiders worldwide eat 400-800 million tons of prey a year. By weight, they eat more insects than humans eat meat and fish in a year. Spiders have a huge positive effect on the local environment, minimizing flies, mosquitoes, and other pest insects.

Just like much of our heavy construction equipment—front-end loaders, excavators, and dump trucks—that use hydraulics to lift heavy loads, spiders use fluid to move their legs. Controlled in the front part of their body, the cephalothorax, spiders move each leg by applying and releasing pressure to liquid in their bodies.

4. Spider Silk Is One of the Strongest Materials on Earth

For its weight, spider silk is stronger than steel and tougher than kevlar. Specifically, that means that a thread of steel as thin as a spider silk thread has far less tensile strength than silk. To be clear though, silk doesn’t have other properties of strength, such as stiffness, and different types of silk from different spider species have different strengths.

5. Most Spiders Can Only See Up Close

This is called nearsightedness, and although it is a disadvantage as a human, it serves a spider just fine because spiders generally only need to be aware of what’s happening in their webs. Many species use vibrations to detect when a fly has wandered into their web, then darting to kill and feed on the prey. Some spiders leave a silk trail to guide them back to their web when they leave, and others even set triplines to alert them when a predator is nearing their web!

While many spiders have poor eyesight, wolf spiders are an exception. They also don’t use webs to capture prey. Wolf spiders rely on keen vision and rapid speed to actually chase down their food.

7. Black Widow Venom is 15 Times Stronger than a Rattlesnake

That’s drop for drop, but a bite from a black widow doesn’t usually kill a human, though it hurts a lot! There’s some solace to take in that black widows are not very aggressive and don’t go out of their way to bite humans.

In Idaho, the most common spiders found in homes are wolf spiders, hobo spiders, black widows, and cellar spiders. Interested in learning more about how to keep spiders out of your home? Check out our blog to keep these pests out, and get rid of them for good. If you’re struggling with a spider infestation, check out Vertex’s pest control services, or contact us today!

What Our Customers Are Saying

Vertex has serviced our home for almost two years and I highly recommended their service. Excellent customer service, very professional and thorough approach to pest control.

Get your free estimate!